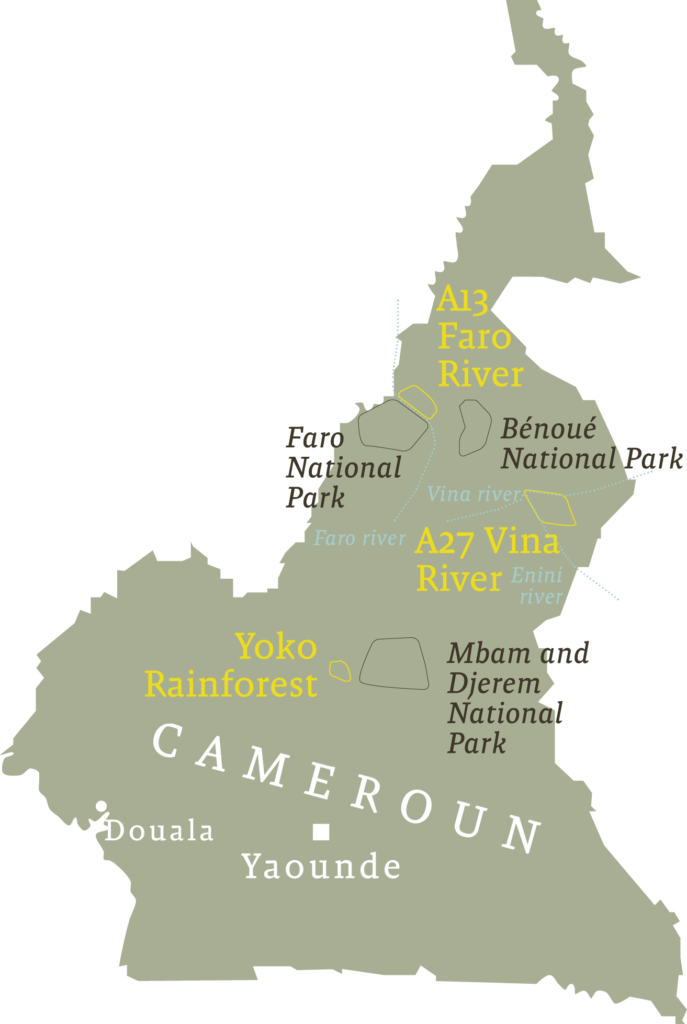 On the banks
of the Vina River,
the Derby eland
is king!

Located in north-eastern Cameroon, just a stone’s throw away from the borders of Chad and the Central African Republic (CAR), Area 27 extends over 130,000 ha. Just a three-hour drive from N’Gaoundéré, this hunting territory constitutes, along with Area 22, a larger whole totaling 250,000 ha and benefitting from the same successful management team. Be way of comparison, the famous Faro National Park located further north and bordering Nigeria, boasts an area of 330,000 ha.

Irrigated by the Vina River, that which crosses the north of Cameroon and winds from the Adamaoua massif, Area 27 presents a very interesting topographical heterogeneity since it mixes plains of shrubby savannah open to valleys offering a break in the landscape and a real diversity of biotopes. This is of great advantage for the management of large game populations because they form a natural obstacle that greatly reduces the phenomenon of decanting towards neighboring regions.

Quite comparable to an island, this area is a haven of peace for the many animal species that live there; a haven that we watch over and protect all year round and not only during the hunting season, which spans from January to April. We have a team on-site that is comprised of twenty adequately equipped eco-guards that ensure that all work related to anti-poaching, the control of pastoralism, and the control of straw-cutters that pose a major threat and disturbance to the wildlife. Everything done here is done not only to attract animals, but above all else to stabilize their presence, which is only possible on the one condition of tranquility. There are few natural predators in the area: if there are indeed sometimes some clues of erratic leopards, the hyena for example, is very little represented.

Area 13 is approximately 70,000 ha. The camp is very comfortable and located in front of the superb Faro shoreline. Area 13 is bordering the Faro National Park; it is the hunting area with the longest border along the park.

The area is particularly rich in Lord Derby Eland. Lions are present all throughout the year and herds of elephants regularly stay in Area 13. This land also has a large population of hippos and several herds of buffalo roam freely. All other species are very well represented.

Hunting has been practiced in moderation since 1995, which has led to a dense population of game and record trophies. We only carry out three safaris per year.

Hunting is practiced by tracking with the incomparable trackers of Cameroon. Hunting lions is done by tracking, making it a truly special experience.

Area 13 is unique for sport fishing. The Nile perch trophies are exceptional. You can also catch the tiger fish and catfish, amongst others.

It is located near Yoko and the National Park Mbam and Djerem. The area can be reached after about four hours by road, from Yaoundé. It is not necessary to use a charter plane to reach this beautiful territory.

This hunting area covers more than 50,000 ha, perched 750 m in height. Such an altitude significantly limits the presence of insects and also ensures the permanence of a pleasant climate. Combining equatorial forests and savannah areas, irrigated by numerous streams and rivers, the biotope appears there as a veritable mosaic of wooded and grassy spaces. The diversity of natural elements such as the salt flats that we maintain year-round is an extremely favorable factor for certain species of game, such as bongo, sitatunga and the forest buffalo.

We ensure that all these species are preserved 365 days a year – especially through our fight against poaching.

Hunting in the rainforest in Cameroon brings great emotions. Particularly in the case of bongo, because it is possible to hunt using dogs trained for this purpose. All hunting is done on foot as roads are limited.

In any event, regardless of the game you want, know that there is no more enchanting setting than these vast Cameroonian rainforests to experience beautiful moments of hunting, exoticism, but also contemplation.

International flight arrival in Douala. Meet and greet and transfer to the hotel.

Plane transfer with domestic flight in the morning to Garoua;
same-day meet and greet and car transfer to the hunting area (4-hour drive).

Luxury bungalows with air conditioning. Our bungalows are equipped with a private bathroom, with shower and toilet. French cuisine.

INCLUDED IN THE PRICE

Reception and assistance at Douala airport on arrival and departure.

Transfer from Garoua Airport by car to the camp; round trip.

Organization of the safari with a professional hunter and trackers.

Full board + soft drinks; please inform us of any special dietary requirements before booking and we will try to cater to these to the best of our ability.

NOT INCLUDED IN THE PRICE

Hotel expenses before and after the duration of the safari.

Dip & pack, veterinary certificates, CITES, etc.; delivery of trophies ready for export at Yaoundé airport (€2,000, depending on size and weight).